by Anna Augart and Giselle Wu

As you may know, the BUA Halloween Costume Competition took place on October 31! There were 3 categories for the winners: Most BUA, Most Creative, and Most Scary! We interviewed 2 of the winners, Sidra Tully ’23 and Aditi Deokar ’21, as well as a few other people who dressed up. Congratulations to the winners, and great job to everyone who was in costume! 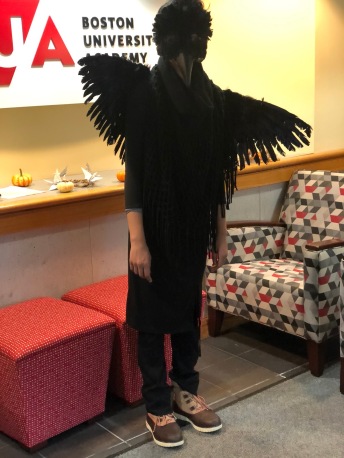 Aditi dressed up as the Raven from Edgar Allan Poe’s famous poem “The Raven.” Her costume was composed of black wings, a raven mask with a beak, black pants, a black dress, and a black netted shawl, which Aditi noticed had created a “surprisingly cool effect of feathers.” She also tried to say the refrain of the poem, “Nevermore,” as much as possible. Last year, Aditi’s costume was the Green Knight from the medieval poem “Sir Gawain,” which she read in English class. She said, “At that time, I won the prize for Most BUA Costume, and I wanted to go for the same prize this year. The most interesting and Halloween-y costume from English this year I could come up with was the Raven.” She bought the wings on Amazon and the mask at Party City. Congratulations, Aditi! 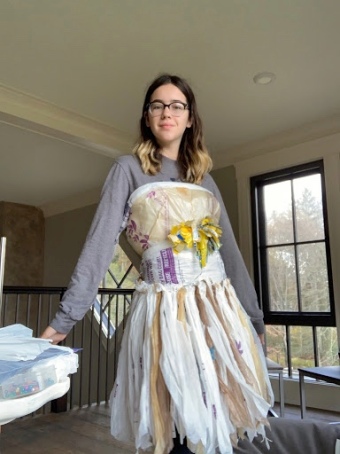 Sidra’s costume was a dress made out of plastic bags. Sidra loves art, and this dress was her independent art project. She put a lot of effort into this dress, and she told us, “I made my costume by cutting the bags and hot glueing them back into the shape of a dress.” It took her about 10 hours to make this amazing dress! Great job, Sidra!

Claire’s costume was a black cat, and she put a lot of effort into making it! She is very interested in fashion design. First, she designed the costume and drew a rendering of it. She then selected a soft velvet fabric to create her costume. She said, “I drafted my own pattern for the costume based on my measurements and the stretchiness of the fabric. This process took a very long time! I then constructed the costume with my serger, a special type of sewing machine used for raw edges and stretchy fabrics.” Claire finished her costume off with a pair of cat ears. Her costume took her around 20-30 hours.

Dr Bain’s costume was a replica of the exact stormtrooper costume worn in the original Star Wars movie. He had wanted a stormtrooper costume since he was young, and he told us, “Now that I’m an adult, I can afford one.” He bought the plastic pieces on the internet, and has spent about 20 hours gluing and assembling the pieces, although it still isn’t done! 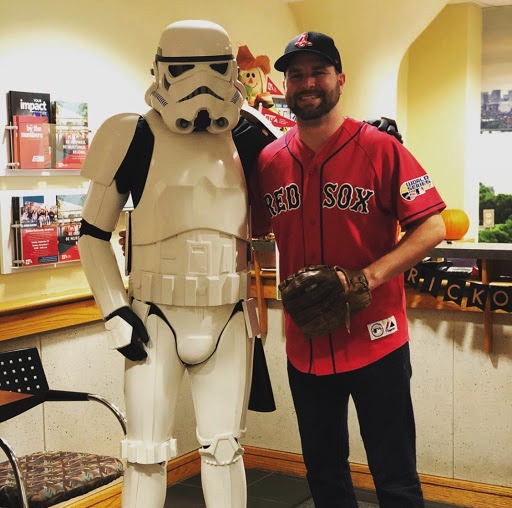 Mr. Ford dressed up as a Red Sox player. He informed us that the Red Sox were a major part of his childhood, especially since his mom is a huge Sox fan. Mr. Ford was inspired by Game 7 of the World Series, which was the night before Halloween, so he “felt in the mood for some baseball stuff.” His costume was composed of items he already owned: A Red Sox cap, his baseball mitt, and his jersey. Mr. Ford told us, “My jersey has FORD on the back and features #33. Some of my favorite Boston athletes have worn #33. My absolute favorite is Jason Varitek, who was captain and catcher for the Red Sox from 1997-2011, but [I also like] Larry Bird of the Celtics, Zdeno Chara of the Bruins, and Kevin Faulk from the early-2000s Patriots, so I have worn #33 whenever I could [when] playing sports.” 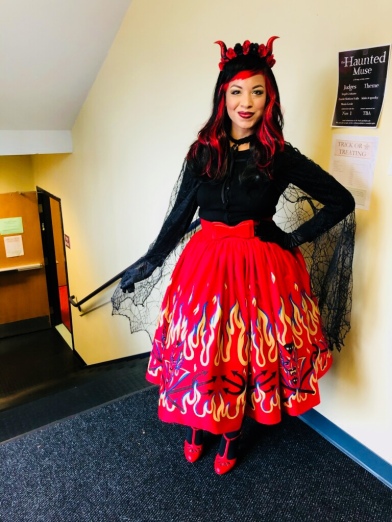 You may have noticed Ms. Barr’s Halloween-themed skirts around BUA. For Halloween, she wore one of her spooky skirts and dressed up as an enchantress casting spells. She told us, “I based my outfit idea and inspirations around my retro skirt by Ben Cooper, Inc.” She bought most of her costume pieces from Party City. Mrs. Barr finished her costume off with an evil makeup look that took her 45 minutes.

Once again, congratulations to everyone who dedicated themselves to the Halloween Costume Competition! Thank you for making this Halloween memorable for us, and we look forward to seeing everyone in costume next year!

View all posts by Zoe Xi